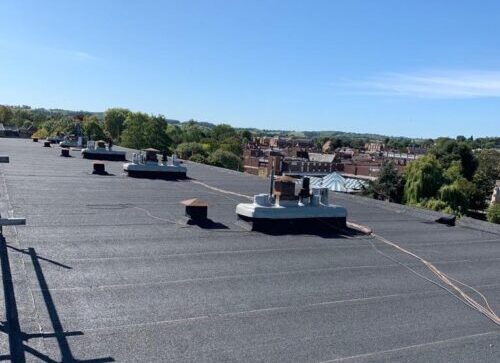 The Reputation Of Felt

Maguire Brothers look at reputation of felt and the damaging history that still plagues it.

In the early years of their development roofing felts were poor in quality and gained a lasting reputation of only suiting shed roofs but, modern roofing felts are nothing like their old counterparts.

What Materials Are Used In Modern Felt?

Modern roofing felts are manufactured with polyester reinforcement carriers and with modified bitumen. This greatly enhances their performance allowing them to cope well with movement, freeze thaw cycles and ultraviolet light.

They are usually manufactured with a ‘carrier’ which is then saturated in bitumen. The quality of both the carriers and the bitumen has improved beyond recognition, resulting in strong, flexible, long lasting systems.

What Techniques Are Used With Modern Felt?

Roofing felt is now laid as a build-up of several layers with staggered overlaps as part of a system ensuring greater security. The build-up of these advanced membranes is usually thicker and more durable than any other option and is far less likely to be punctured by occasional access.

This coupled with a greater understanding of flat roof design means that high-performance felt systems are now as durable as anything else on the market.

Roofing felts used to only be ‘torch on’, which meant being applied using the heat from an open flame. However, greater awareness of the risks of naked flames has forced innovation.

With manufacturers now offering complete or partial cold applied systems, which are applied with adhesives and hot air guns. This minimises or removes the use of heat entirely and is particularly important at junctions with cladding or pitched roofs.

Modern felt is vastly superior in all aspects to felt from the 1930’s. No longer is it only suitable for a garden shed. But it certainly serves a purpose there too.

Today, roofing felts are as durable as anything else on the market (except some metals) and in most cases they provide the most cost effective solutions.

Some examples of our projects that involved felt are Brewery Shopping Centre, Cricket Green School and Croydon University Hospital.

Maguire Brothers offer commercial roof felting in London and the South East. If you would like to book a roof survey for your building, or have a question we haven’t answered, contact us today.

If you are interested in learning more about felt systems you can view our CPD on “Which Flat Roofing System?”

Our previous article on felt can be viewed here.