Home » News » Posts » Effects Of Ice Dams On A Roof 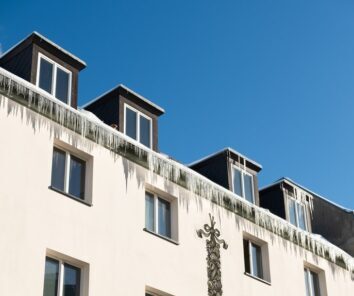 Effects Of Ice Dams On A Roof

We look at what the effects of ice dams on a roof are, how they form and how to prevent them reoccurring.

Ice dams are a ridge of ice that form at the edge of a roof, preventing water from draining off the roof. Ice dams have the capacity to heavily damage a roof and in some cases completely remove guttering from a building. Therefore if you manage properties, or survey them for damage, it is important to know the causes of ice dams, the damage they can potentially cause and how to avoid them occurring.

Ice dams occur either due to a lack of heating across all of your roof. Typically ice melts and drains towards the eaves due to warm internal temperatures, however, the cool eave’s temperatures means that the water quickly refreezes and forms an ice dam.

They also occur in gutters in a similar matter, as they are typically not heated. Where the ice forms and blocking drainage, thus allowing water to build up behind it.

Ice dams can easily damage, or even outright destroy, gutters from a roof. This can lead to flooding and damage to not only the perimeter walls and ground, but also neighbouring buildings.

Ice dams trap water which begins to pool. This can then leak into the building, damaging the insulation, ceilings, walls, and other areas.

These leaks can also become devastating as there is a large amount of water feeding into it due to the ice dam.

The water that is trapped on the roof is dirty and carries bacteria and mould spores. As those germs reach inside, they can easily grow in the climate-controlled environment, leading to significant problems for both your building and its occupants.

In the worst-case scenario, the roofing material can buckle under the sheer weight of an ice dam. This is because a lot of roofs are not designed to withstand an extensive weight load. For more information on weight loading on a roof, read our article here.

Installing both proper ventilation for your roof as well as making sure it’s insulation is up to the standards of the Building Regulations 2010. These two factors will ensure that less moisture is left in your roof at all times and that it is evenly heated, almost entirely eliminating the chance of ice dams forming.

Also having regular inspections of your roof with allow you to both spot and address issues before they can worsen. If you are working with a roof that often suffers from ice dams, having a roofer you trust on hand allows you to quickly deal with issues as soon as they appear.

Whilst in many cases water ponding on your roof generally isn’t a problem, it can become one when freezing temperatures occur.

If your drains are clogged or if you have any areas on your roof where water is not draining properly, ice can form and stick around. The thicker the ice, the longer it takes to melt. The longer the ice stays, the more likely and damaging the problem will become.

While older roofing systems are more susceptible to this kind of damage, it can also occur on newer roofs.

Maguire Brothers have been assisting clients in rectifying such issues for over 40 years, in that time many cold winters have passed and many icy issues rectified on a huge range of commercial properties.

If you want more information about the effects of ice dams on a roof, or you’re having issues with them currently, contact us today.